Soak up the Views 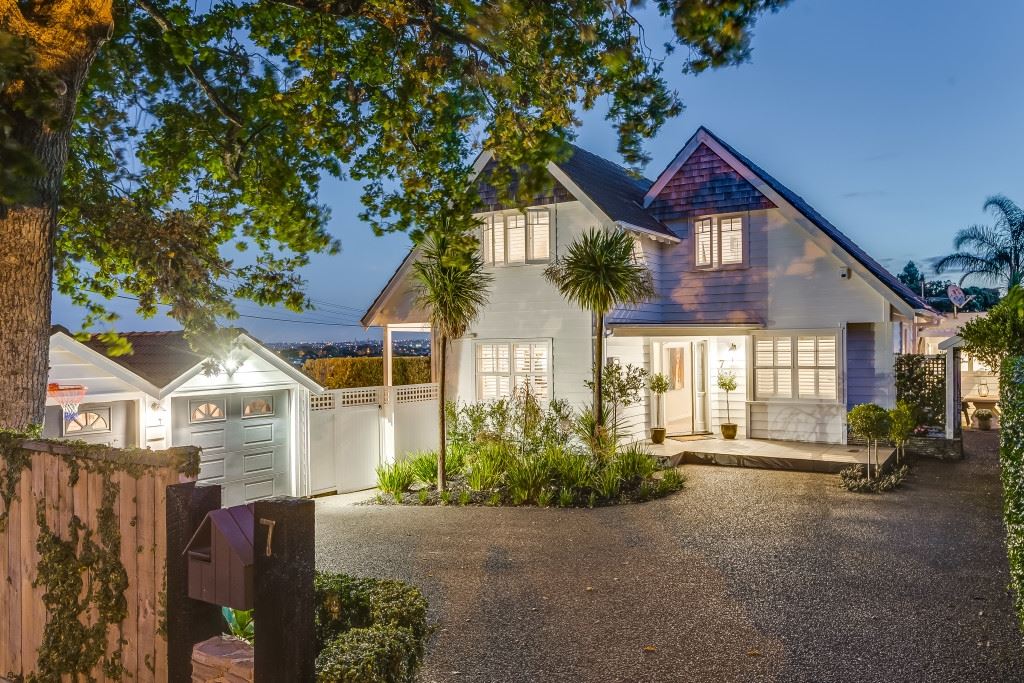 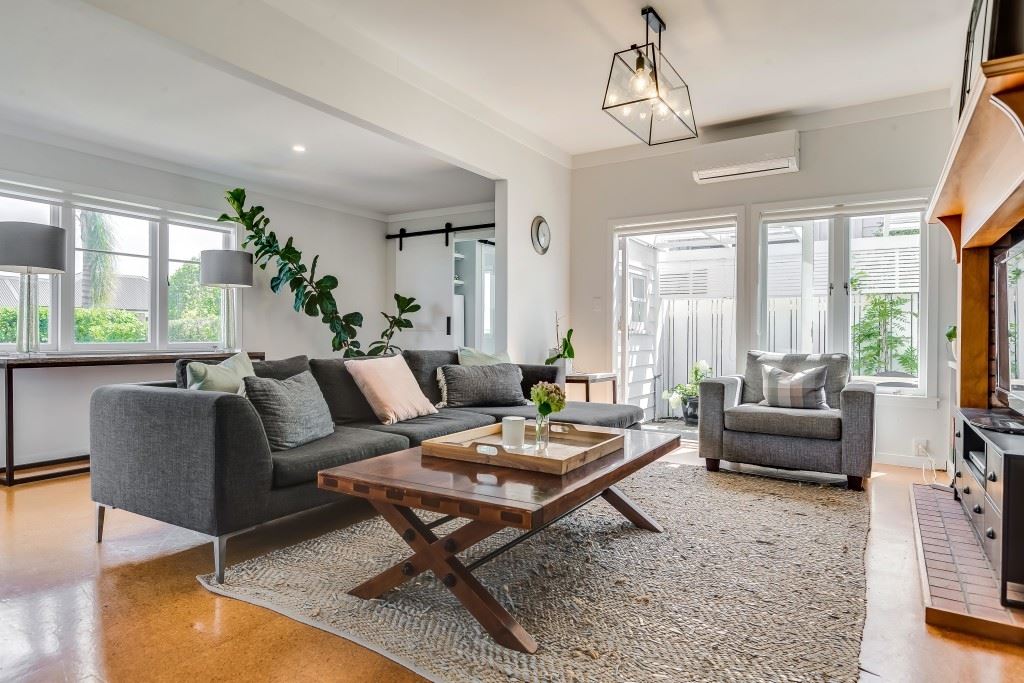 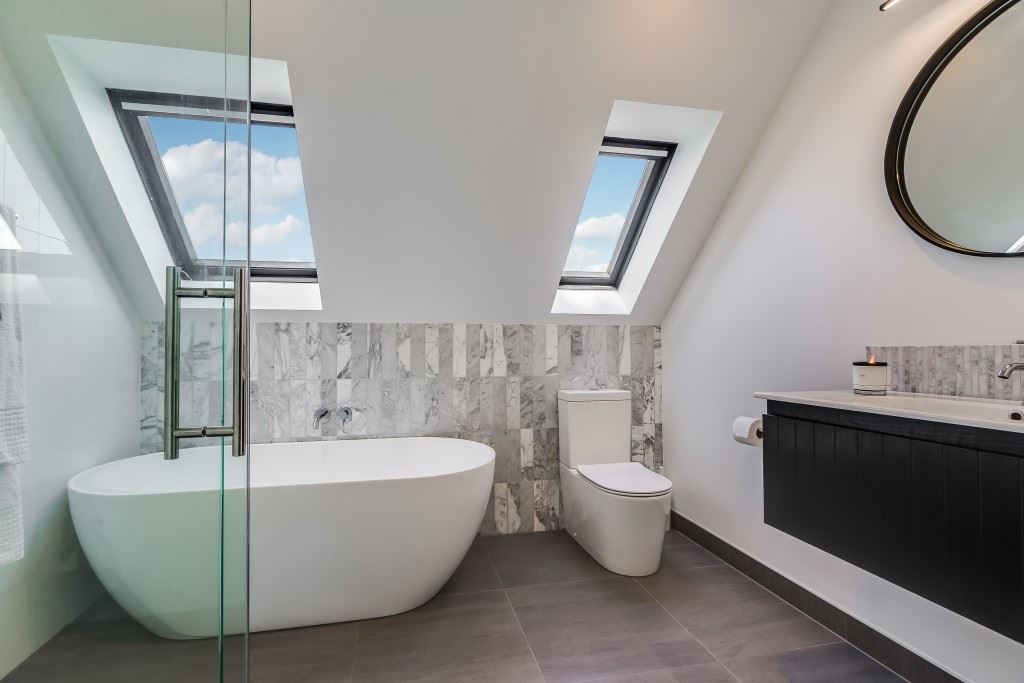 Ten years ago designer Cathryn Davey and her husband Brycewere looking for the house “that you move in for some time”, when they came across a
charming 1930s house in the Hauraki enclave of Takapuna. “We’d been living in Devonport and friends had moved here, they kept saying ‘come and look at this house,’” says Cathryn. “Brycewasn’t convinced but then we went upstairs, saw the view of the city and Rangitoto, North Head and Mt Victoria. She’s old, but we’ve taken care of her.”

The English-style cottage had been renovated sympathetically in the 1980s or 90s, but by the time the Daveys arrived it was getting shabby around the edges. With children Alex and Jacob then 7 and 4, the Daveys were happy to live in the house as it was, converting a formal hedged side yard into a grassed cricket pitch and smartening up the pool area which opens off the family room deck.With some paint and tidying, it was perfect for the family and their friends to spread out. It is only in the past year that Cathryn, with the help of her builder brother Marcus Vesey, has completely renovated the property.

But a recent health scare for Cathryn, and the prospect of the kids moving away in the next few years, has prompted the family to look for a smaller property. Both Cathryn and Marcus have experience in commercial, rather than domestic, design which made the pair sticklers for detail and sticking to a budget and timeline. The footprint of the house worked, so Cathryn’s focus was to re-jig walls in the upstairs bedrooms and bathroom and the downstairs laundry/bathroom to make the spaces work better, cleverly mixing high with low finishes to totally update the house. So there are marble tiles and splash backs in the kitchen and bathroom, a gorgeous stone for the en suite, custom steel mirrors in the bathrooms, but a sharp black and
white lino in the laundry area that looks like fashionable encaustic tile. Apale seafog grey with white trim, and crisp new carpets made the rooms light and bright.

The Daveys were careful to retain the best of the old house, complementing with fresh new finishes. Existing brass light fittings (now fashionable again) were re-used in the living room, echoed by modern steel in similar shapes in the family room; panelled doors were repeated in the new doors but Cathryn added newstylish bronzed door handles throughout. Now painted grey, built-in shelves in the living room and dining room are a light and airy backdrop to the family’s books and art pieces. Early on the couple agreed that keeping separate rooms worked for the family and meant adults and kids had their own places to hang out, with the dining room sitting between formal and informal living rooms.

At the front of the house, the more formal living room opens to a small terrace, and has a nook used as a reading corner, while the spreading family room opens to the back deck and pool. Cathryn and Marcus removed a giant copper hood over the fireplace in the casual room, creating a perfect niche to tuck away the television, but decided to remove the fireplace in the formal living room to get better flow. From the family room, french doors lead to a courtyard out of the wind, surrounded by hedges and a pretty arched gate.

Cathryn retained the existing U-shaped kitchen — its views to the city are the family’s favorites — but refinished the paneled cabinets in soft grey. Smart pewter handles, a herringbone marble splash back and new quartz counters brought the already efficient room into the 21st century. At the back of the family room, a grotty laundry and shower was refurbished in smart white and a back
door added so that it could double as a pool changing area.

A fashionable black and white barn door makes a smart transition from the family room. But it was upstairs where the real transformation happened. By taking out the chimney from the downstairs fireplace, and moving a bedroom door, Cathryn created enough space to add a master en suite and reconfigure the family bathroom. In the master bedroom, she added a wall of his-and-hers walk in closets (doors fold completely back for fast access) and the stylish bathroom is lit by a new skylight to highlight her favorite stone on the walls. The oval mirrors were a custom-made treat. To make the most of the pitched ceiling, Cathryn added a half wall behind the bedhead, tucking in storage (there are cupboards galore through the
rest of the house). There are views of the oak trees through white plantation shutters.

The family bathroom was completely rearranged to make space for an elegant oval free-standing tub, the marble wall tiles are repeated inminiature in a
splash back, the vanity a dark contrast in vertically etched oak that repeats the doors through the house. The kids chose their bedroom wall colours — turquoise for Alex, smokey dark blue for Jacob — that frame their views of the city and harbour. A fourth bedroom on this floor, along with another downstairs, completes the arrangement.
“The house and pool has been great for the kids, it’s always been the place for birthdays,” says Cathryn. “We love the area, so we’ll be staying here, but another family will love this as much as we do.”